Hello, hello all!
I have returned to the blog as part of the Blood Ties blog tour! Author and good friend Hazel West has a new book out, and I'm proud to host an interview with her on this blog (as well as a few other goodies)! 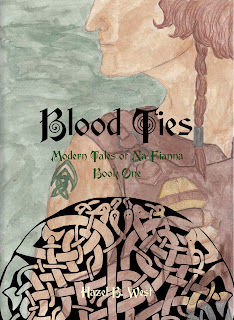 Synopsis
In an Ireland that mixes high kings, faeries, and modern warriors who drive fast cars, Ciran, a descendant from the famous warrior Fionn Mac Cool, bands together with a company of young warriors from the legendary order of Na Fianna to go on a quest to recover their missing family members who were captured by the Goblins in a shaky peace between the two kingdoms. Iran and his companions must figure out not only how they are going to rescue the prisoners, but how they are going to complete their mission without killing each other. Through trial and error, running battles, unexpected friendships, and daring escapes, Ciran and his company come fact to face with the Goblin King himself in a final battle that will decide the fate of all involved and of Ireland itself.

The first book in a few series, Blood Ties takes the traditional Irish legends and puts a modern spin on them with a heavy helping of friendship and the love of family.

Purchase A Copy From Any Of These Places!
Createspace Paperback
Amazon Paperback
Kindle
Smashwords

MP: What inspired you to write Blood Ties?

HB: Well, I remember thinking out of the blue one day about modern warriors who carried swords around in their fancy sports cars and it kind of grew from there. Then later I thought a retelling of the "Fionn Mac Cool" legends would be cool and the two ideas kind of formed together to create the world of Blood Ties.

MP: I know when I'm writing a story, I have very specific Authors that I turn to for fresh inspiration - Authors whose writing I want to imitate or who write books set in the same era or genre. What Authors/books did you turn to?

HB: Well, first I read folklore retellings, Rosemary Sutcliff being the first with her book The High Deeds of Fionn Mac Cool, but as far as feel goes, I turned to Maggie Stiefvater with her weird sort of way she's able to combine ancient feeling with the modern era. Also Tessa Gratton with her United States of Asgard series and maybe a tiny bit of Rick Riordan because I like the humor he adds to traditional folklore and mythology and fits it into our world.

MP: Who is your favorite character in Blood Ties? Why?

HB: I like Ciran as the main character, but I think Eamon is my favorite overall. He has a lot of layers you probably won't see all of in the first book, but I think he's quite a bit like me in a lot of respects. He's a natural leader but he doesn't want to lead, he just does what he has to and doesn't care whether he gets the credit for it. Really, he just wants to sit and read in his library and get away from people for a while.

MP: Were you sad when you had to kill of/defeat your villain, or did you enjoy it immensely?

HB: I can't say I shed tears for Lorcan. I really did enjoy coming up with him, but he was a pain in the behind to write because he just wouldn't tell me anything, so year (spoiler alert - but really, look at the genre) I didn't mind offing him. Although he's not my most despicable creation, either. ;)

MP: Throughout the writing process, which character did you get along with the best, and who gave you the most trouble?

HB: Apart from Lorcan, none of the characters really gave me trouble in this. They came to me pretty much as their own people and I always know when that happens that it's going to be an easy write as far as characters go. I had the most fun with the conversations between Eamon and Killian - if I let those two go, there will be pages of pointless and pretty much unusable dialogue.

MP: I have specific CDs/movie soundtracks I always listen to when writing. What was some of the music that helped you write Blood Ties?

HB: For Blood Ties, I had a lot of modern folk like Gaelic Storm, Flogging Molly, and Runrig to kind of set the tone of a modern, yet folky, setting. And then Emerald Rose with their very Fae-related songs are fun. "Fairies Stole My Keys" is still my favorite - modern like with Faeries, it was a big inspiration for my story. Besides that, a mix of Celtic soundtrack music I picked up from various artists.

MP: What was your first reaction upon writing THE END on your final draft of Blood Ties?

HB: It was a very happy feeling because it took me until Draft Four just to get Lorcan to tell me what his evil plans were (this is when I wish for more monologuing villains), but as soon as I knew everything had fallen into place, it was definitely a good feeling.

MP: What can Readers expect next? Do you have a new book in the works? Tell us a bit about it.

HB: Well, the next published work everyone will see is the sequel to Blood Ties, which is already written and in post-production. It's called An Earthly King and continues a few months after Blood Ties leaves off, but is more of Eamon's story. He now has to choose a wife from the charming ladies of the realm, which is not nearly as fun as it sounds. Meanwhile, troubles among the Faery Courts arise and threaten another war. It's set around Samhain (Halloween) and also has elements of "The Ballad of Tam Lin," so I'm excited for this one to come out. :) Besides that, I have a couple of online serial projects in the works, which I will not announce quite yet, but you will know about when they are ready to happen!

I want to thank Hazel West for asking The Reading Hedgehog to participate in her blog tour again! I'm always excited and happy and honored to host authors, self-published and big house published both! And I don't know about the rest of you, but I'm very excited for Blood Ties!

About the Author
Hazel West lives in Purgatory - er, Florida - with her books and her hedgehog Horatio. When she's not writing, she's reading other people's books, studying folklore, or binge-watching something on Netflix - drinking coffee is also a given.

Read An Excerpt!
We were hauled into the huge hall with vaulted ceilings and a large skylight that let in the light of day, falling elegantly onto the throne at one end of the room on a built up dais. Lounging on the throne was Lorcan himself. He was tall, I could tell that even seeing him sitting down, and rail thin like most Goblins. In actuality, he was rather unassuming. He wore no kingly finery, being dressed in a plain silk shirt and black trousers underneath a long leather coat. His hair was ash blond and drawn back in a club to keep it away from his face. But it was not his appearance that told he held a position of power, no, it was all his presence, and that was obvious from the moment he raised his head to look at his lieutenant as we were shoved into the hall.
“Ah, Cronin, what have you brought me?”
“Several special guests, my lord,” the lieutenant replied as we were pushed forward.
Lorcan stood, frowning over us. “Do my eyes deceive me or is that High King Eamon O’Brian standing there?”
“It is,” Eamon replied himself.
Lorcan grinned. “Excellent! This shall go even better than expected. I have been thinking on the best way to get an audience with you, save making a trip to the Common Lands myself. Now you have given me that chance by coming here and saving me the trouble. Tell me, Airdrígh, what has brought you here to my humble dwelling?”
“I know you are no fool, Lorcan,” Eamon said, his voice quiet, and I thought him very regal himself. “You have my brother and other warriors of mine. I came to see that you give them back to me.”
“Ah, yes, the patrol I took,” Lorcan nodded. “Very brave those men. Some more so than others. Some who have suffered greatly for their bravery.” He looked at me here, and fear knotted my stomach. I tried to stay impassive but was unable to, especially when he started to walk toward me, his boots echoing on the stone floor. One hand took me by the chin and forced me to look into his pale blue eyes. “A Mac Cool, I see. The next younger brother, I would guess. Your brother was one of the brave ones.” I glared at him, wanting to scream, wanting to demand to know whether Aeden really still lived as Jarlath had said, but I could say nothing. If I did, I feared it would all end horribly wrong.