Xena and Xander Holmes have just learned that their shy classmate, Alice, is heir to a royal throne. Then they discover that their ancestor Sherlock Holmes had his suspicions about the kidnapping and return of Alice's grandmother, the princess of Borogovia. Alice is to be crowned on her thirteen birthday. . . .but she goes missing days before the ceremony. Who

Plain Kate lives in a world of superstitions and curses, where a song can heal a wound and a shadow can work its magic. As the wood-carver's daughter, Kate held a carving knife before a spoon, and her wooden charms are so fine that some even call her "witch-blade" - a dangerous nickname in a town where witches are hunted and burned in the square.

I'm extremely sorry that I abandoned you on Christmas! Things just got so very busy, and before I knew it I was stuffed to my nose with candy and gingerbread, and every good thing; the very thought of getting up and retrieving the computer sent my stomach into spasms of pain. The good news, though, is that Shewsbury Cakes are not exclusively for Christmas, so I will be posting the recipe the day before New Year's!

Obligated to wed her father's choice in successor to the throne, seventeen-year-old Princess Alera of Hytanica believes that she is being forced into the worst of all possible fates - a marriage to an arrogant and hot-tempered Steldor.

When the attractive and mysterious Narian arrives from enemy lands bearing secrets and different ideas about women's roles in the world, Alera's private desires threaten to destroy the kingdom. The discovery of Narian's shocking past plunges Alera into a shadowy world of palace intrigue and ancient blood feuds, leaving her unsure of what to believe in, or whom to trust.In writing this review, I will try to keep the Author's youthfulness in mind, but I confess that even with that continuous fact, Legacy isn't a book I would recommend. Four hundred and sixty-two pages long, the book shouldn't have taken as long as it did to finish, and the reason for my proverbial dragging feet is the plain fact that the book drug its own feet - and continued to do so even when I picked mine up. The prologue promised an interesting enough storyline, and I realize that this is only the first book in a series, and because it is, Legacy ought to have offered a whole lot more than it did. I was so bored by events that I am seriously questioning whether or not I am going to read the rest.


It wasn't just the lack of storyline, though; there were the characters. Alera is a heroine difficult to sympathize with. She causes most of her problems by not effectively communicating her objections. Alera does usually have legitimate complaints, but rather than discussing situations with a cool head, she dissolves into crying and flinging angry accusations. In short, she doesn't help herself. And then her character just becomes flaky as more and more young men are introduced into her life. She hates Steldor, but then she starts to not mind his company too much - and even gives in to his kisses, while still insisting that she hates him. And she has every reason to hate Steldor. He's a genuine toss-pot, completely enamored with himself, flirtatious to a degree that very well borders on sexual harassment and assault, and has a violent temper that makes him a prime candidate for a wife beater. So why doesn't Alera suspect that he's just being manipulative when he starts being a little nicer to her? Good question! And that's why I brand her as being flaky.


The other characters are, at best, dull. Steldor is fun to hate, true enough, but in making his despicable, the Author goes overboard with his egotistical ways, and then has to do a clumsy back-pedal when she wants the Readers to feel a little sorry for Steldor as the book goes on. If she is trying to convince the Reader that Steldor really does love Alera, it isn't convincing, because from the very beginning of Chapter One, the Author sets him up to be a completely despicable character, with not an inch of him to like. I did not mind Narian too much, because I admit that as a Reader - and author - mysterious characters who keep to themselves attract my interest, but then when romance blooms between Alera and Narian, he becomes just as dull as everyone else. Romance just doesn't suit quiet, mysterious characters with tragic backgrounds - not unless the writer handles it very delicately, and in this case, it wasn't handled thus. For one thing, Narian seemed far to sensible to fall for a girl as careless and young as Alera, if he were to fall for anybody. Also, there was the king, who the Reader, I think, was supposed to view as an overall kind father who cared about his daughters, and yet his actions when it comes to Alera's objections over Steldor don't show this. True, Alera doesn't do a very good job explaining to her dad that Steldor is creepy and clearly just wants to bed her, but a kind and caring father wouldn't just say, "Whatever your objections are, they aren't legitimate. You'll marry the creep because I like him or else." If the Author wanted such behavior to suit the king, then he ought to have been a hard-nosed father; not one who professed to care for his daughter's happiness. A wise and good king would see Steldor for what he really was. About the only character I truly liked consistently was London, Alera's bodyguard, whose disregard for chain-of-command isn't out of arrogance, but practicality. If a situation is urgent, London goes to the immediate source, and if his superior isn't taking the correct course of action, he isn't afraid to say so.


Then there is just the overall unbelievability of certain situations. I realize that in worlds entirely made up by the Author, one can design one's kingdoms, societies, and things like that to one's fancy. But, if it is to be believable, even fiction writers must obey certain rules, and one of the main ones when concerning monarchy is the very real fact that a Crown Princess would not be allowed - and certainly not encouraged - to marry the Captain of the Guard's son. Marriages among nobility/royalty were mainly for political gain - lands, money, needed allegiances and troops that would accompany said allegiances, and to keep the royal bloodline purely of the nobility and not peasantry. Just because Steldor shows battle prowess would not outweigh the fact that he was the Captain of the Guard's son, and hardly a title of which to speak. Princesses were betrothed to dukes, earls, princes, and others of equal standing. Even in a fictional world, one cannot ignore the natural laws and desires of royalty, and their desires were political. There's also the free manner in which the bodyguards act with members of the royal family, saying whatever they please to their monarchs and their monarch's children, and even talking back to their superior officers. Sorry, it just wouldn't happen.


And then there is the writing. I dearly wish that Cayla Kluver had waited several years before publishing Legacy. She ought to have stashed it away for a while and then looked it over when she had gained that experience and maturity which comes with growing up, because I really do think Legacy had a lot of potential, but because she didn't wait her youthfulness shows in her writing in all of its aspects - characters, plot development, and descriptions. Here is a book which is bursting with copious descriptions of dresses, hair styles, shoes, jewelry, jerkins, trousers, shirts, cloaks, undergarments, and hats. If a character has changed their shirt since their previous appearance in the book, don't worry - you'll get a full picture of its color, cut, and even how many wrinkles there are. There is a time and place for wardrobe details, and clearly the Author thought it was necessary to do it every time. That's a sign of youthful writing; I know that when I was younger I loved describing what everyone was wearing, and it's a good way to practice writing! But don't include it in your actual published work. The fact that Alera seemed older than her seventeen years at times, and then much, much younger at others, also displayed a lack of maturity in the writing, as did the sudden appearance of big words to replace more common ones. And it wasn't in dialogue, when a character whose idiosyncrasy might be to use unusually large words.


All in all, I wasn't satisfied with Legacy. Given a few more years, it could have been good, and maybe as she matures, the Author's writing will mature with her; I see potential in her writing career if she gives herself time to develop in that area. But Legacy, I am afraid, falls flat of being interesting.

Others in This Trilogy:
1)Legacy
2)Allegiance
3)Sacrifice

The gold thread shimmers in the fading light. It promises Charlotte Miller a way out of debt, a chance to save her family's beloved wool mill. It promises a future for her sister, livelihood for her townsfolk, security against her sinuous and grasping uncle. It might even promise what she didn't know she needed: lasting hope and true love.

Review: The Name of the Star - Maureen Johnson 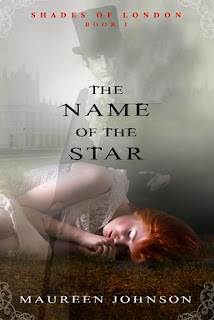 The day Louisiana teenager Rory Deveaux arrives in London marks a memorable occasion. For Rory, it's the start of a new life at a London boarding school. But for many, this will be remembered as the day a series of brutal murders broke out across the city - gruesome crimes mimicking the horrific work of Jack the Ripper in the autumn of 1888.

Review: The Secret of the Rose - Sarah L. Thomson

Rosalind Archer has secrets. Her father is in jail. She and her brother, Robin, are in hiding. Desperate to survive, she cuts her hair and disguises herself as a boy.