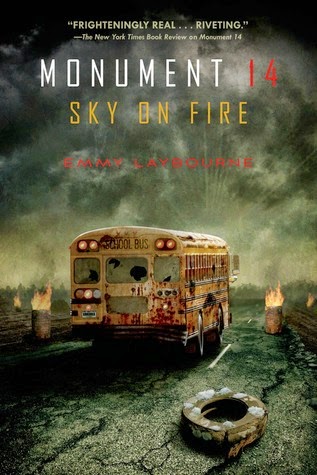 
Trapped in a superstore by a series of escalating disasters, including a monster hailstorm and terrifying chemical weapons spill, brothers Dean and Alex learned how to survive, and worked together with twelve other kids to build a refuge from the chaos. But then strangers appeared, destroying their fragile peace, and bringing both fresh disaster and a glimmer of hope.

Knowing that the chemical weapons saturating the air outside will turn him into a bloodthirsty rage monster, Dean decides to stay in the safety of the store with Astrid and some of the younger kids. But their sanctuary has already been breached once. . . .

Meanwhile, Alex, determined to find their parents, heads out into the darkness and devastation with Niko and some others in a recently repaired school bus. If they can get to Denver International Airport, they might be evacuated to safety. But the outside world is even worse than they expected. . . .


Cover Blurb: Yes or No? Post-apocalyptic-y (that should be an actual word), dark sky, fire, beat-up school bus - yeah, I like it well enough. It's intriguing.


Characters: I am still not attached to anyone, except maybe Alex, Dean's younger brother. Dean just spends too much time pining after Astrid, and then he loses his honor (more on that later), so what small attachment I had for him kind of vanished. Astrid is just a bitch, and a bit of a two-player. Chloe desperately needed to be used as an alternative source of food; I wanted to smack her so badly. Sahalia actually gets a little better, but I still don't like her. Niko kind of becomes a broken-down wreck, which was just sad; I wanted to wrap him in a blanket, but not necessarily because I liked him. He was just that miserable. Alex is the intelligent one here; the one who actually keeps his cool and all that, so I guess I liked him. But I still didn't become super attached.

Plot: Most of the kids have left the superstore in Monument 14 and are now making their way to Denver Airport, where people are being evacuated to Alaska and Canada. Alex, Dean's brother, is among the kids. But Dean and Astrid have stayed behind, along with Chloe and the twins, because if they are exposed to the chemicals outside, they will turn into bloodthirsty killers. Dean decided it was safer for them to stay behind, and for the others to send out a rescue party once they reach Denver Airport. Outside, Alex's group faces a nightmarish landscape with hostiles everywhere and no food or clean water. And back at the superstore, De and Astrid struggle to survive, as the power is slowly drained, and other hostiles try to break in. Sky on Fire was a very short read; shorter than it probably should have been. A lot happens, but not as much as I was expecting. For the most part, the encounters Alex's group has with outsiders are pretty quick. Dean and Astrid continue to try and make the superstore safe, then it gets breached, and they have to fight them off, et cetera. I wasn't bored; the book was too short for that to happen. But I did feel like a lot more could have happened.

Writing Style: First person, present tense. The chapters alternate between Dean and Alex's narrations, and they both have a very distinctive voice. I didn't enjoy Dean's narration as much because fewer things happened beyond his pining for Astrid. But overall, I never found myself dreading a narration switch.

Content: Astrid and Dean sleep together, but there are no details.

Conclusion: In some ways, the setup for a third book felt a little forced. The Author could have made this one longer and put everything that no doubt will be in the third book in this one. But I'll stop complaining now. Sky on Fire was too short to drag, and this is a plot-driven book; not so much character-driven. With the kids split up, there is less high school drama, less whining. So overall, I did enjoy this installment more.