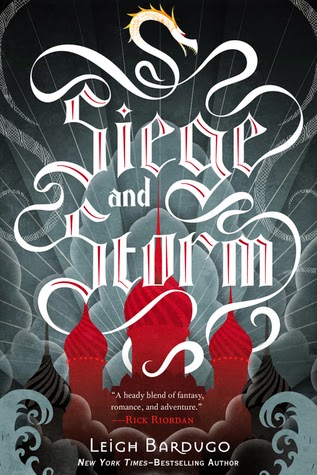 
Hunted across the True Sea, haunted by the lives she took on the Fold, Alina must try to make a life with Mal in an unfamiliar land, all while keeping her identity as the Sun Summoner a secret. But she can't outrun her past or her destiny for long.

The Darkling has emerged from the Shadow Fold with a terrifying new power and a dangerous plan that will test the very boundaries of the natural world. With the help of a notorious privateer, Alina returns to the country she abandoned, determined to fight the forces gathering against Ravka. But as her power grows, Alina slips deeper into the Darkling's game of forbidden magic, and farther away from Mal. Somehow, she will have to choose between her country, her power, and the love she always thought would guide her - or risk losing everything to the oncoming storm.


Cover Blurb: Yes or No? As always, I love, love, love the cover art. So pretty, with the Russian castle and the sea whip/dragon at the top. Love it!

"I don't care if you think I'm a Saint of a fool or the Darkling's whore. If you want to remain at the Little Palace, you will follow me. And if you don't like it, you will be gone by tonight, or I will have you in chains. I am a soldier. I am the Sun Summoner. And I'm the only chance you have." (pg. 233)


Alina continues to be a likable protagonist, and in fact I may have liked her even better in this installment! She realizes what needs to be done and who she must ally herself with, and she does it. She's much more in control of her powers and therefore less weak. And when she decides to put her foot down and be in command, she does it. However, she also suffers from a bad habit of not communicating, and it does cause problems - with Mal especially.

Nikolai, a new character and the younger prince, is awesome! I just adore him! He's funny and intelligent and knows how to accomplish his goals. Yeah, he's a bit of a flirt, but it's all in fun - he doesn't mean anything by it. Not initially (more on that later). I also loved meeting his older brother, Vasiliy, a complete jerk and oaf. The contrast between them rather reminded me of Thor and Loki: older brother who isn't ready for the throne, younger brother who got all of the brains and is disregarded by his father and loved by his mother. Yes, this made me like Nikolai even more. ;-) Now Mal. . . .I wanted to thump Mal more than once in Siege and Storm, and he is in fact the reason this book got one less strawberry than Shadow and Bone. As soon as Nikolai appears on the scene, Mal turns into a jealous, complaining, huffy, irritating male. He can't be around Nikolai for half a second without flying off the handle, he's always suspicious whenever Alina is around Nikolai (even though - hello! They're planning a war! Alina has to attend strategic meetings with him!), and he's always complaining when Alina has to play the part with Nikolai in front of the masses. I'm not saying Mal has some right to be annoyed when Nikolai suggests Alina marry him and keep Mal as her "personal" body guard, but I just hate it when males turn into jealous jerks. The Darkling isn't in this one much, of course, but when he is, he's creepy. And awesome. Mostly creepy.

The Romance: I hesitate to call it a love triangle. Alina loves Mal - she makes that very clear. She also notices Nikolai, but not in a romantic way. Nikolai is attractive; she'd be a bit blind to not notice him. But it doesn't go beyond that. Nikolai. . . .I think he does rather like Alina, but he also wants her so long as her heart is free. For all of his joking around and teasing, he's the mature one when it comes to the romance. Mal, as I said, just turns into a brooding jealous lump. He doesn't care about saving Ravka from the Darkling; he just wants to go set up house with Alina. I desperately hope that Nikolai and Alina don't become romantically involved. I like their relationship where it is right now. Nikolai can like Alina, but they both have other things to worry about.

Plot: Alina and Mal escaped the Darkling last time, but they did not defeat him. Now, they are pursued across the True Sea, and then Alina learns that the amplifier - the stag's horns - she wears is not the only one. There are two others, and if all three are combined, she may have the power to defeat the Darkling. But time is not on her side, and the Darkling has only grown more powerful. He can do more than control the darkness; he can create life from it. Horrible monsters that can only be destroyed by her light. She and Mal are forced to ally themselves with Nikolai, the wayward younger prince of Ravka - someone who has his country's interests at heart, but will use anyone he has to to get what he wants. Siege and Storm has more political intrigue and moves at a bit of a faster pace than Shadow and Bone. Of course, there's smatterings of Mal and Alina fighting, which got old, but plenty of other things happened to overshadow that annoyance. My biggest complaint, other than Mal, was Alina's lack of communication. She starts to have nightmares about the Darkling - nightmares that are disturbingly real. The Darkling turns up in peculiar places and can actually touch her. What does Alina do? She doesn't tell anyone! She lets Mal think that she's just turning cold and distant in her pursuit for the other two amplifiers. Alina, just tell him! It's pretty serious that the Darkling can appear to you in a very real form. I liked that we get to see more of the worlds outside of Ravka, as well as Ravka itself. More world building! I love it!

Writing Style: First person, past tense. Very vivid imagery, just like the last book, somewhat modern dialogue which didn't wholly work for me, but also didn't throw the story off.

Content: Some rather heated kissing scenes. It doesn't go anywhere, though.

Conclusion: I'm rather glad that this is only a trilogy, otherwise it would threaten to have a recurring ending: faceoff with the Darkling, Alina escapes him, but doesn't defeat him. There's only so many times you can do that with a villain before they look weak. I am very curious to see what happens next in Rise and Ruin. Since it is the last book, I'm not too worried about Nikolai becoming a romantic interest. But if Mal died, I can't say I would miss him.