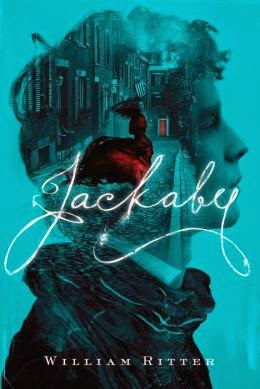 
Newly arrived in New Fiddleham, New England, 1892, and in need of a job, Abigail Rook meets R. F. Jackaby, a investigator of the unexplained with a keen eye for the extraordinary - including the ability to see supernatural beings. Abigail has a gift for noticing ordinary but important details, which makes her perfect for the position of Jackaby's assistant.

On her first day, Abigail finds herself in the midst of a thrilling case: a serial killer is on the loose. The police are convinced it's an ordinary villain, but Jackaby is certain it's a nonhuman creature, whose existence the police - with the exception of a handsome young detective named Charlie Cane - deny.

Cover Blurb: Yes or No? I do love the cover; the color and the silhouette and the city street in the background. It's awesome!

Characters: Be forewarned: I don't know how coherent this review will be, as I'm still in a state of fangirling over how bloody much I loved this book. I shall do my best to be coherent, but I may fail.

I hefted my suitcase to the bed and opened it with a click. The garments within were pressed up to either side, as though embarrassed to be seen with one another. To one end, fine fabrics with delicate, embroidered hems and layers of lace began immediately to expand, stretching in the morning light as the compressed fabric breathed again. Opposite the gentle pastels and impractical frippery sat a few dust-brown denim work trousers and tragically sensible shirts. A handful of undergarments and handkerchiefs meekly navigated the space between, keeping quietly to themselves.

I stared at the luggage and sighed. These were my options. One by one I had worn through everything in between, until I was faced with these choices, which seemed to reflect my lot in life. I could costume myself as a ruddy boy or as a ridiculous cupcake. (pg. 11)


Meet Abigail Rook, our protagonist and a young seventeen-year-old woman who has escaped the confines of her life in England to seek adventure in New England. New England wasn't exactly her first destination, but she ended up there regardless, and then somehow ends up being Jackaby's investigative assistant. I loved Abigail. She is practical, sensible, humorous, intelligent, and in short everything a female protagonist ought to be - especially in this sort of story. There is nothing to dislike about her! She has all of those qualities The Practical Female must have, and it is so rare for Authors to write Practical Females! What a refreshing change Abigail is from the run-of-the-mill female protagonists nowadays! No chip on her shoulder, no flip-flopping emotions, no attitude, a genuine interest in adventure, and practicality! I cannot stress enough the importance of practicality. Thank you, William Ritter, for writing such a fantastic protagonist! I could spend hours with her and never get irritated! Her questions are sensible and her doubts understandable. After all, who in their right mind would just accept the existence of fairies without proof?

A young officer with a uniform that looked as though it had once belonged to a much larger man stepped forward timidly. "But Marlowe's been inside nearly half an hour, sir."

R. F. Jackaby is Sherlock Holmes with the personality of, maybe, David Tennant's Doctor in Doctor Who. With a dash of Matt Smith. And a few others. But unlike Sherlock, Jackaby only notices clues that are supernatural; hence why Abigail is so useful to him, because she notices the mundane - the natural, such as mail boxes and the victims' personal items. Jackaby lacks Sherlock's social anxiety, bipolar swings (at least, that I've seen), and sometimes downright rudeness. Jackaby ticks Chief Inspector Marlowe off, but mostly because Marlowe refuses to believe in the supernatural, and not because Jackaby is rude. Certainly, Jackaby can tend to say what he's thinking without checking himself, but more in the way that one of the Doctor's might, and not Sherlock. I adored Jackaby as much as Abigail. He's odd and funny and just an absolute riot. The side characters - Charlie Cane, Jenny, Douglas the duck who used to be one of Jackaby's former assistants, Chief Inspector Marlowe - are all terrific. I wanted to wrap Charlie in a blanket, Jenny takes care of everyone in Jackaby's household, Douglas was just fun because of his backstory, and I genuinely hated Chief Inspector Marlowe at times. Unlike Lestrade, who I believe was a good investigator, but got so riled whenever Sherlock was around, I don't think Marlowe was actually all that intelligent. He's so bent on not seeing the supernatural, even when it's staring him in the face.

The Romance: Charlie and Abigail notice each other, but I'm perfectly all right with it. The romance isn't rushed or even a big part of the story. Will it develop as the series goes on? Oh, I'm sure. And when thought is put into a romance; when it grows with the characters - I don't mind it. Abigail and Jackaby's relationship is entirely platonic, and I very much hope it stays that way. Be super, duper good friends, but please don't get romantically involved. It isn't that I can't picture Jackaby ever being romantically involved; oddly enough, I can. But I miss platonic relationships, and theirs is so perfect. Besides that, there's an age difference.

Plot: Abigail Rook has run away from her home in England to pursue adventure. She always wanted to go on archaeological digs with her father, but he always maintained that her place was behind the side lines. Abigail has had enough; she wants to be in the thick of it. However, her plans to join an archaeological expedition in Carpathian Mountains flop, when it turns out that there's no adventure to be had at all. Determined to not return to her home in England, Abigail eventually makes her way to New Fiddleham, New England, where she meets the strange R. F. Jackaby - investigator of the supernatural and magical. She's immediately swept up in a murder case, where the victims have been viciously torn apart and their bloody mysteriously taken. The police are convinced it's just a serial murderer; Jackaby thinks otherwise. And they need to track this supernatural being down before they become the next target. Fangirling commence; this plot was awesome! The murder investigation was engaging, and the Author wove world building and character development deftly in. I loved how the common myths surrounding many supernatural beings turned out to be quite untrue, and Jackaby would explain the truth behind it. It made for a mix of originality and familiarity. There's never a dull moment in the case, and the Author also drops hints of foreboding for future installments.

Believability: Not wholly applicable, though the Author very much adheres to societal protocol and conduct. Abigail flaunts a lot of this protocol, but she does it in a realistic sort of way; in a manner that a girl from that era would. Without a modern attitude.

Writing Style: First person, past tense. The Author approaches Abigail's narration as if she is writing it up at some point after their investigation, much like Watson does with his and Sherlock's adventures. I love it when Authors take this approach to first person narrations; it makes it so much more realistic and believable. Abigail's narration voice is awesome; I absolutely love her humor and somewhat dramatic way of describing things. The Author captured a perfect tone for this era.

Conclusion: I figured out who the killer was, but just when I thought it, I immediately dismissed it because I wasn't sure if maybe the Author was going to actually make his red herring the real culprit. I cannot sing the praises of this book enough. It is totally my new favorite. I love the era, the world, the characters, the plot, the writing style - everything. I hope this series doesn't end any time soon. And I just once again want to thank the Author for writing such a fantastic female protagonist!!

Recommended Audience: Girl-and-guy read, fourteen-and-up, fans of historical fantasy, Victorian mysteries, Sherlock Holmes, and Doctor Who will adore this. And I will end with another favorite quote. Seriously; I could just quote this entire book. But I loved this scene:

"Why don't you have a little notebook?" I asked.

"Yes, for jotting down clues and leads and things. Terribly handy for a detective, I should think. Marlowe's got one. It has a leather cover and flips up top-wise. I wouldn't mind a notebook like that, myself. We should each have one. We'd look more like proper detectives, then."

"Firstly," Jackaby said with a sigh, "a 'proper detective' is about the last thing a good detective wants to look like, most of the time. Secondly, it isn't a bad idea on the whole, but I've used notebooks and I found them entirely useless. I've give them to my assistants to type up, and none of them could ever decipher my handwriting. One of them rather rudely suggested it looked like the scribblings of a chimp."

"Well then, you could always read it out for me to copy - or not copy it at all, just use it for your own reference."

"Because 'chimp' was generous. I can scarcely read a word I've written. I find it's far simpler to skip the exercise entirely. I can dictate my findings to you at the end of the day in the comfort of the office."