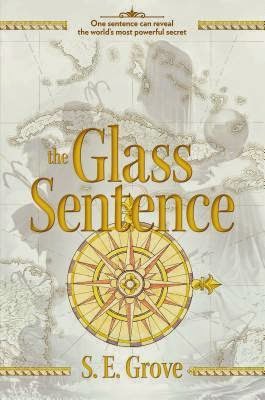 
It is 1891. Almost a century ago, the Great Disruption threw all of the continents into different time periods, from prehistory to the far future. It remade the world. Explorers took their lives into their hands; mapmaking became a fine art, a mixture of science and magic.

Sophia Tims comes from a family of explorers and cartologers. Eight years ago, her parents went on an urgent mission, and never returned. She lives with her brilliant, absentminded uncle Shadrack, the foremost cartologer in Boston, who is teaching her everything he knows. Then Shadrack is kidnapped. And Sophia, who has rarely been outside of Boston, is the only one who can search for him. Her new friend Theo, a refugee from the West, comes along. From the moment the two of them get on the train, their lives are in as much danger as Shadrack's - because he has entrusted Sophia with the most important artifact in his collection.


Cover Blurb: Yes or No? Yes, I like the cover. It promises adventure and fantasy with a dash of steampunk or some historical setting. Which, of course, sums this book up entirely. I also love that the dust jacket is actually transparent parchment - much like a map!


Characters: Sophia appreciates adventure and knowledge and doing what needs to be done. I couldn't help but like her. It took me a while to realize that she was only thirteen, as she acts much older and the Author doesn't say her age for quite some time. But thirteen is the perfect age of a female protagonist to go on adventures. Theo was also really awesome. He had experience of the outside world - something that Sophia desperately needed - and he wasn't completely trustworthy. He's got a loyal heart, but he also struggles with doing what will serve his own interests best. Blanca, the villainess, was actually intimidating. She carried out her threats, kept her cool, and never left any doubt in my mind that she would do anything to get what she wanted. That being said, I also felt incredibly sorry for her in the end. I won't say why - spoiler - but it worked. Now for the pirates, Calixta and her brother Burr. There is only one way to sum up Calixta's personality, and that's with a quote from the book:

"Why were you here?" Sophia asked, with what she hoped sounded like polite interest.

"Oh, I only came to negotiate a new contract with a merchant. Last chance, with the borders closing and all that. I tried to send my brother Burr, seeing as I am the captain, after all, and he is only quartermaster, but he says that I negotiate better. And, well," she sighed, "my brother is a darling, but it is also true that he rarely seems to land the lucrative contracts I do." She trilled with laughter. "Nor does he land the proposals! Had I known my trip would result in three highly ridiculous marriage propositions, I would have refused, contracts be damned. One was a banker who insisted on agreeing vehemently with everything I said. Charming, but not so much with his mouth full of food." She wrinkled her nose delicately. "Under the mistaken impression that he would benefit financially from marrying me, no doubt. Then a lawyer who has quietly married and buried no fewer than three wives already; rather suspicious, no? And, lastly, the merchant's son, who almost certainly proposed only to enrage his father. How well he succeeded! Men may irritate women entirely by accident, but I believe they infuriate one another wholly by design." Calixta laughed merrily, fanning herself with her gloves. "Truly," she said, with a hint of pride, "I am always far more trouble than I'm worth." (pg. 214-215)

Calixta is one of those rather flamboyant, talkative, a bit high on herself, yet proper and sophisticated female characters that are so often done badly. But in this case, she was done perfectly. I loved Calixta and her crew and her banterings with her brother Burr. She was just truly awesome.

The Romance: There is something of a tiny crush between Sophia and Theo, I think, but it doesn't become important.

Plot: No one knows what caused the Great Disruption in 1799. But it happened, and it flung the continents in different time periods - some into prehistory, others in the future. Sophia Tims lives in 1891 Boston, with her renowned cartologist uncle Shadrack. Her parents went on an exploration venture long ago and never returned. And now Boston is about to close its borders to anyone who doesn't have their birth papers with them - that includes Sophia's parents, if they're still alive. But all of that is pushed aside when Shadrack is kidnapped by mysterious Sandmen with grappling hooks for weapons and strange scars on their faces. With the help of a boy from the West - Theo - Sophia must travel to The Baldlands and find someone named Veressa. The only problem is: the Sandmen are after Sophia, too. Because Shadrack left something with her. . . .something they desperately want. Let's talk about the world building first: it's awesome. This new world, where various continents are set in different time periods - or several at the same time - is thoroughly engaging. It doesn't always make sense, because the Author blends a lot of time periods together, so you can't always pinpoint when it's supposed to be. The Author does a lot of world building in this installment, but she also leaves a lot of blanks - mostly because the characters themselves don't even know why things are the way they are, or what caused the Great Disruption, or anything. So it's a learning experience for everyone. I won't call this a sign of an underdeveloped world, because I believe that the holes are there for a reason; that they are an actual part of the ongoing plot of the trilogy. The story of The Glass Sentence is very exciting. Lots of exploring and new, weird things, and perilous situations. I never got bored.

Writing Style: Third person, past tense. There are a few chapters that switch between following Sophia and Theo, and following Shadrack. The writing style is very good. It is a little bit Middle Grade-ish, and I believe this is considered a YA novel. But it's still very good. The Author doesn't write down to her audience; she writes to them.

Conclusion: The climax got a little hard to follow at times, but this again falls into the "there's holes because even the characters don't know what happened" category. I was surprised at how much I sympathized with Blanca, the villainess, in the end - and I was further surprised at how okay I was with having the villain become so sympathetic. The Glass Sentence is a potentially new bestselling fantasy series, in my opinion. It's original and fascinating and has a terrific cast of characters. I can't wait to read more.